Civil Unrest: How Inspiration Can Grow From Turmoil & ‘Civil Disorder’ 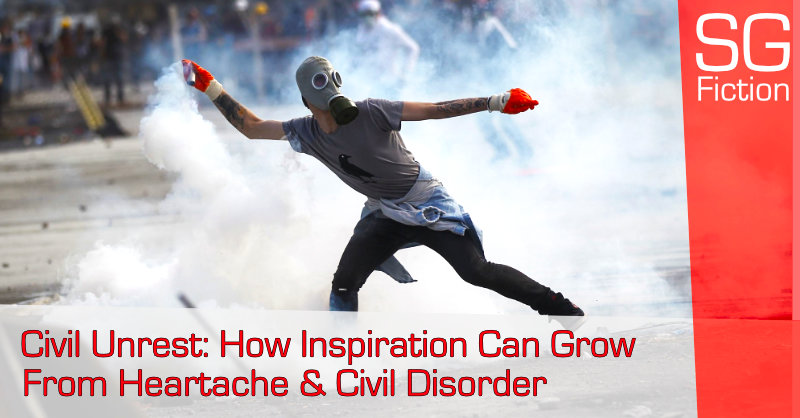 All over the world, there have been incidents of ‘civil unrest & disorder’ as people fight for their futures. Here is how inspiration can grow from turmoil.

In this Civil Unrest article, you will find points in these areas:

Read the rest of the Civil Unrest article and consider how you can use your creative side to get inspiration from turmoil.

Politicians and governments all over the world will be quick to label ‘civil unrest’ and ‘civil disorder’ as a scourge and even a terrorist act. However, as political administrations move to silence the voices of their citizens for the worry of how it may look on the world stage, people take it on themselves to unite as one.

Currently, the situation in the US with protests over the murder of George Floyd by a police officer is making news right across the globe. Here, we see the emotions of not only African Americans, but people from across the country are disgusted at how such a situation can be allowed to happen in this day and age.

In Hong Kong, the Chinese government look to bring in sweeping changes to legislation to be able to extradite Hong Kong citizens to mainland China, meaning that their independence and freedom is under threat. For months now, the youth of Hong Kong have fought to defend the freedoms they feel are being stripped away by the mainland government in Beijing.

In my own country of Northern Ireland, I have been witness to multiple passionate protests by Protestants and Catholics for many years. For over thirty years, the armed conflict claimed more than 3,500 lives, and thousands more were injured from 1968-1998 during The Troubles. Yet, the official numbers of those scarred by what happened in my home country will never be known.

In this creative writing blog article, I have decided to look at how artists and writers have found inspiration from within the mire of civil unrest and civil disorder over the years. For some, marching on streets or even taking up arms is seen as the only way to protect their values and way of life. However, others choose to express themselves creatively, meaning their message lives on long after the enraged voices and gunfire fall silent.

Music: Rage Against The Machine – Killing In The Name Of

One of the most notable bands for angst and standing up against oppression was Rage Against The Machine. As a teenager growing up in Ireland, I was a massive fan of the band and loved nothing more than going out to rock nights in clubs in Belfast. The band’s anthem of ‘Killing In The Name Of‘ was a staple of the music choice every week and I never grew bored of hearing it.

In the current climate of the George Floyd protests in the US, we can’t help but be reminded of the fact that racial discrimination continues to permeate society. Those who have spilt onto the streets are standing up for what they believe in. They ensure that their message of Black Lives Matter is heard loud and clear.

When Killing In The Name Of was released in 1992, the band were inspired by what unfolded when Rodney King was assaulted by four LAPD officers. Again, this footage was captured on video, and civil unrest erupted when the country was enraged by the actions of law enforcement.

The lyrics of Killing In The Name Of capture the fury and rage that the country felt. As a result of the LAPD officers’ actions, there were mass riots and civil disorder as people took out their frustrations on the streets of America.

What is sad to see is how some elements of society can still behave so despicably to those of darker skin colour. It is disgusting to see how almost 30 years later, people of colour are still treated in such a manner by law enforcement. I can only hope that artists in the coloured communities can channel their creative energies to ensure that what happened to George Floyd and Rodney King is not forgotten.

Listen to Killing In The Name Of and see if you agree. How do you feel current events will inspire those impacted by the George Floyd murder? Comment below.

As a native of Northern Ireland, it is sometimes hard to get away from the fact that my country is best known for two things: The Giant’s Causeway and The Troubles. For hundreds of years, Ireland has rebelled against British colonialism. However, between 1968 and 1998, The Troubles was a period that cut a permanent scar on the communities of by country.

In a previous blog, I referenced a poem by Ciaran Carson called ‘Belfast Confetti’. It is a poem that has been studied by GCSE students as an example of how the confusion of civil unrest can cause psychological confusion.

When I attended Queen’s University for my Creative Writing MA, I remember passing Ciaran in the corridors of the Seamus Heaney Centre. There, he was a professor of English and won numerous awards for his work. His awards included the T.S. Elliot Prize and the Irish Times Irish Literature Prize.

When I grew up in Belfast, like many of those my age, I only witnessed the tail-end of The Troubles. However, by seeing events like the Shankill Bombing first-hand as a child, I can testify to the confusion, fear, and anger that grows out of such destructive events.

Many young men who experienced the height of The Troubles, felt the need to join both protestant and catholic paramilitaries to protect their communities from attack. These young people, like Ciaran Carson, felt affected by the turmoil and tumult that tore through Northern Ireland. However, writers like Ciaran Carson chose to write about their experiences rather than pick up Semtex or an Armalite.

Listen to the reading of Belfast Confetti by Ciaran Carson above. How do you feel it is still relevant today? Comment below.

In 2002, Michael Moore released a documentary that left me dumbfounded and angered at the same time. I was only eighteen at the time, but the movie Bowling For Columbine gave me an insight into the world of the NRA and gun control in the US.

For years, people have protested against the NRA’s influence over policy in the US and demonstrations like the Million Mom March in 2000 showed how seriously ordinary people take the introduction of gun control laws in a country where so many mass shootings take place each year.

As a teenager living in Northern Ireland, I was fifteen when the Columbine massacre took place on April 20th, 1999. I remember watching the BBC News reports of how two teenagers went on a killing spree around Columbine High School, killing thirteen people. The events that transpired affected me as a young man and I remember thinking about how it would be if such incidents happened in my secondary school.

Whereas many people don’t agree with Michael Moore’s style and approach to documentary making, there has to be consensus on how awful such events are in the US and how they scar communities for decades afterwards. The anger that many people feel about such atrocities continues to fuel protests and the desire to bring in gun laws to restrict the sale of guns to people. The belief that such controls would limit the likes of Klebold and Harris to get their hands on firearms so easily.

In the years since Columbine, there have been dozens of such incidents. Most notably, the March For Our Lives protests in 2018, sparked civil demonstrations in over 800 locations around the world. The voices of young people who raised their voices took it upon themselves to make their points heard. Their message, not to be another statistic of gun violence, inspired millions.

It is this message that was carried across continents without the need for civil unrest or riots. This message should remain in the minds and the mouths of generations to come as the US continues to debate whether to tighten gun control in the years ahead.

If you are yet to see Bowling For Columbine, make sure to give it a watch. If you are aware of other movies or documentaries that have been inspired by protest, share them below. Tell us why they resonated with you so deeply.

The western world is one that prides itself of allowing the right for its citizens to protest and hold civil demonstrations. The fact that we can gather in groups in the thousands and march with signs and banners to voice our disgust at issues in society is a right that we cannot take for granted.

With the current demonstrations across the world for George Floyd and Black Lives Matter, it is inspiring to see so many people from all ethnicities demonstrate peacefully. Seeing law enforcement officers take a knee with demonstrators shows that the outpouring of emotion is felt across the divide from protestor to police officer and from skin colour to skin colour.

In the years ahead, I hope those who have been affected by the recent events can take up the pen, the microphone, the paintbrush, or the camera and show the world how they feel through their eyes. Those from a black, Asian, minority ethnic (BAME) background have stories to tell and should be free to express themselves creatively and showcase their perspective.

‘Civil unrest’ and ‘civil disorder’ have inspired people for hundreds of years, and it will continue to do so for hundreds more. Unfortunately, there will always be despicable events that take the lives of people young or old, and it is up to those who protest to do so without giving others the chance to label their demonstration as ‘civil unrest’.

Whether the life that is taken is a black man from the US, a protestant or catholic in Northern Ireland, or a teenager in a high school, all lives matter. We are all irreplaceable in the eyes of those who love us. Every life taken in such circumstances is one life too many. Allow those who fall to live through your creativity, ensuring their memory remains for generations to come.

After reading the Civil Unrest article, click on the infographic below to read how to be more productive during Covid lockdown and when writing in general. 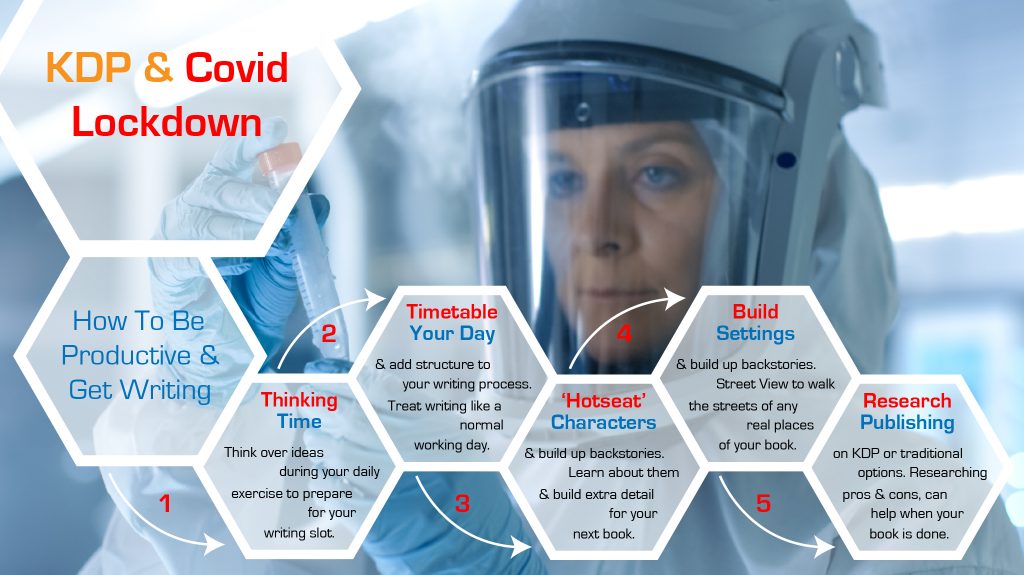