Science Fiction Authors: Stories Of Plausible Futures On The Horizon 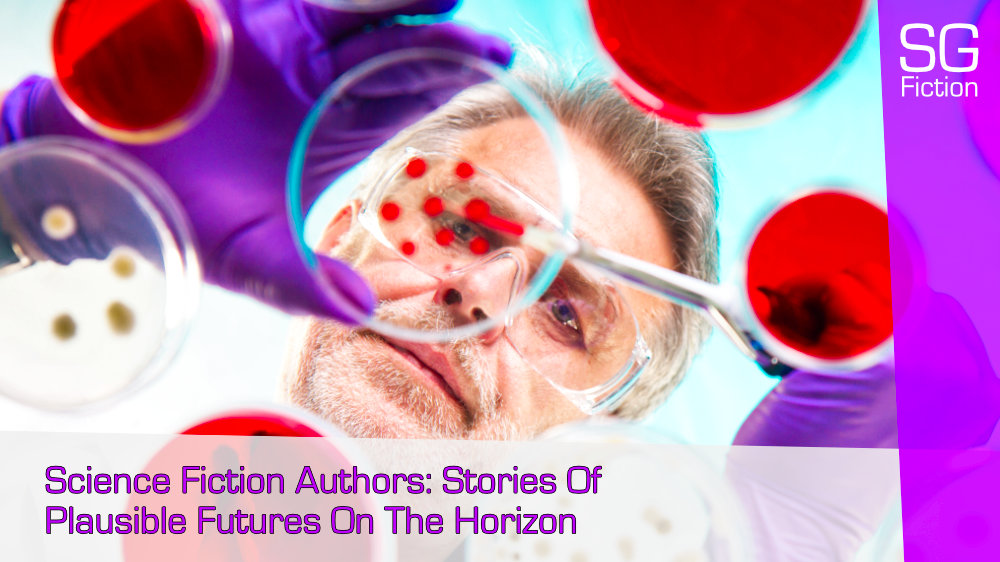 Science fiction authors are incredibly popular writers in literature. By composing stories of plausible futures on the horizon, can they be considered entertainment or warnings for us in the present day?

In this Science Fiction Authors article, you will find information on the following areas:

Read the rest of the Science Fiction Authors article and learn how many sci-fi novels could be painting a vision of a future just on the horizon.

Science fiction authors are considered by many to be some of the most imaginative and groundbreaking groups of writers in literature. By fusing elements of real-life science or scientific concepts with a compelling fictional story, they can push the boundaries of what we believe to be achievable as a species. However, areas of their work can be seen as warnings to scientists and society in the present day.

The fiction books we write are primarily composed of complex characters and detailed settings connected with an intricate plot that helps to dictate the fabric and the pace of the story we tell. Yet, as writers, we cannot help but be influenced by the world in which we live, by the news we read, and the beliefs we hold as people. It is here where we introduce themes, tropes and subplots that can help shine a light on areas that we wish to highlight.

Skilled science fiction authors can weave such devices into their books in a manner that is organic and subtle, instead of preaching and being heavy-handed. By including such elements in an understated fashion, the message is seen as an undercurrent, rather than tsunami-like commentaries on unethical practices witnessed today.

In this creative writing blog article, I look to share some of the areas that famous sci-fi writers have covered in their novels. We know that science fiction is primarily seen as entertainment and escapism, but what messages can be taken from within that can be seen as warnings of a plausible future on the horizon?

When I sat down with the idea of writing Inside Iris and Anna’s Awakening, I never thought I would ever live through a pandemic in my lifetime. Before writing the first book of The IRIS Trilogy, I was fascinated by the government and the NHS restricting the use of antibiotics to ensure the UK population didn’t develop a herd resistance. When comparing this to the SARS and Ebola outbreaks that were making the headlines, I wanted to explore the world of viral pandemics and disease in a dystopian fiction novel of my own.

The warnings from scientists of animal diseases making their way into humans had been heard before, but it was only when the Covid-19 pandemic spread in Wuhan, China, that these warnings took on added importance. It is clear that we are a fragile species, and the rise of Coronavirus has shown us just how susceptible we are to such events in the future.

Oryx and Crake, by Margaret Atwood, is book one of The Maddaddam Trilogy, where the human race is overwhelmed by a plague and is struggling to survive. Throughout this novel, a character called Snowman shares the story of his past as a young man named Jimmy. As Jimmy surveys the barren landscape, he gradually comes to terms with how he could likely be the only human left on Earth.

Pandemics, plagues, and the end of civilisation through disease have fascinated writers for many years. In the post-Covid world, we can be sure that there will be many more novels that deal with this issue in years to come.

During the Cold War, the world regularly held its breath when the thought of a nuclear apocalypse was a reality with the USSR and USA’s arms race. When the Cuban Missile Crisis brought the two superpowers to the brink of nuclear war, it was the closest we have ever come to witnessing a nuclear apocalypse. As time has moved on and the Soviet Union has crumbled, it is sometimes worrying that the Putin regime in Russia or the Chinese Xi system could be where the next Cold War could spawn.

In Dmitry Glukhovsky’s Metro 2033, part one of The Metro 2033 Trilogy, we are introduced to the world that has been left behind after a nuclear apocalypse. Set in the dark, cramped metro system of Moscow, the main character Artyom explores the underground world where the remnants of civilisation have managed to escape the radiation after a nuclear war. The story is one man’s journey to navigate a system of Metro stations and factions who inhabit the world beneath the barren surface.

The story of nuclear war and possible nuclear terrorism is a popular one among sci-fi and thriller writers. As we are yet to witness the power of a full-blown nuclear war, we need only look at the horrifying images from Hiroshima and Nagasaki to remember that this is a fate that would devastate our species.

As we move towards a world where space exploration is racing towards space tourism, with companies like Space X, the ideas brought up by science fiction authors around space exploration are coming into focus. In the summer of 2020, we watched with heightened interest as NASA and Space X teamed up to successfully embark on a mission to the International Space Station. There is no doubt that this first flight was the birth of commercial space travel, and we will see more of its kind in the decades ahead.

In Andy Weir’s novel, The Martian, we see Mark Watney battle the elements to survive an extended stay on The Red Planet. When a dust storm strikes during a mission to Mars, the protagonist finds himself alone in the Martian wilderness. Here, he has to find a way to survive, using only the resources he has at hand and his sheer resourcefulness.

With the reality of space tourism on the horizon, it is clear that there will be missions to the ISS, Moon, and beyond that will have mishaps as well as tragedy. When we see polished shows, like Star Trek, with technologically advanced space ships, it is novels like The Martian that give us a glimpse of how real-life space travel will be until hundreds or thousands of years into the future.

My favourite novel of all time is Frankenstein, by Mary Shelley. The idea of a man joining the limbs of the deceased to create a creature and bring it back to life was one that gripped me from the age of sixteen. Since then, I have read the book over a dozen times and continue to find new areas of interest each time I join Dr Frankenstein. This novel is the perfect blend of sci-fi and horror, where we feel more compassion for the creature created at the hands of Dr Frankenstein than the doctor himself. By seeing the doctor recoil in disgust at the creature before him when it opens its yellow eyes for the first time, we are reminded that man shouldn’t play God.

The area of genetic engineering and bringing species back to life is fascinating to me. In Jurassic Park, by Michael Crichton, we see an extreme version of what could happen if scientists wanted to resurrect creatures that were previously extinct. With InGen’s programme to bring dinosaurs back to life by the process of genetic engineering and cloning, we get a glimpse of a world that prioritises making money over the ethical ambiguity of resurrecting creatures who were killed millions of years ago.

From the grim, early days of surgery in Frankenstein to the modern bioengineering in Jurassic Park, there are more questions than answers concerning man playing God in science fiction. Even in the Oryx and Crake novel mentioned in the first section, we see how animals are engineered to house organs that could ease the transplant process for humans. The world of cloning and bioengineering is one that science fiction authors question regularly, and where we are moving at a steady pace.

Abuse Of The Information Age

When it comes to the abuse of information and state control, we need to look no further than George Orwell’s classic, 1984. By living in a world that is growing increasingly dependent on technology, social media, and mobile devices, we find that we are watched and tracked everywhere daily. Where many tropes within the other novels shared in this article could be seen as years into the future, the idea of Big Brother is arguably in our present. There could even be some regimes in the world of 2020 that could imprison their citizens for ‘thought crimes’ or freedom of speech.

As we all know, the value of information is paramount. Whether it is used by governments to track Covid-19 spread or social media companies to sell advertising to multi-national companies, data is king. However, what if the information was misused in criminal investigations, like The Minority Report, by Philip K Dick? In a world where mutant ‘precogs’ can foresee crimes before they are committed, the protagonist is framed for the murder of a man named Leopold Kaplan. With such power and access to data, it is frightening to think that people in political power or the authorities could frame citizens for crimes they didn’t commit.

In the real world of the early twenty-first century, we have seen examples of how election campaigns have been brought under scrutiny with claims of hacking and ‘fake news’, like the Trump/Clinton presidential campaign of 2016. We have also seen how the Cambridge Analytica scandal shone a light on how social media data can be used and manipulated for political gain. If we are to live in a world that is increasingly susceptible to data breaches and misuse, we must protect our online data better than ever.

There is no doubt that science fiction authors play an essential role in developing stories that make us think as consumers and as a society. For those of us who love to read sci-fi and dystopian fiction, we are shown a world where some of the real-life scientific discoveries have been used in ways that bring about plagues, monsters, or abuse of power by a state.

Where some of the stories written by the authors highlighted in this article may sound far-fetched, there is also an element of plausibility that they could happen in years to come. Whether it is extreme genetic engineering seen in Jurassic Park or the many variants of pandemics in fiction, aspects of what we read in fiction books have become a reality.

With the recent Covid-19 pandemic still fresh in our minds, we have seen first-hand how the effects of a virus can ravage the world and its economies. Therefore, we need to consider how elements of science fiction can make the transition into science fact. As science fiction authors, this means we play an active role in showing society how science can be used for the wrong reasons. In turn, we can inform as well as entertain our readership as to how a world with the wrong intentions can abuse one of humankind’s greatest gifts – the inquisitive nature and ingenuity of science.