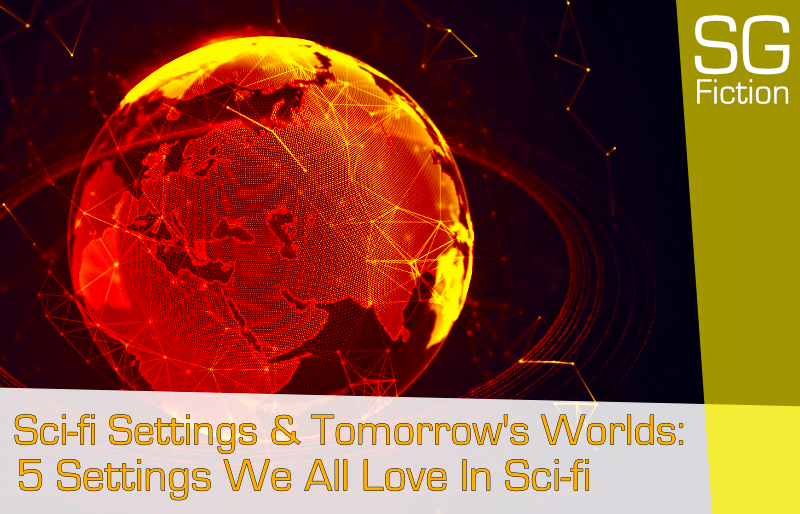 What sci fi settings have shaped your imagination as a creative writer or author? Here are some of my favourites.

Sci Fi Settings: Why They Are So Important

There are many sci fi settings that science fiction authors and scriptwriters hold as memorable in their minds. In sci-fi books for teens and adults, the world the characters inhabit can elevate a story to the next level, whether it is set in a dystopian city landscape or in a galaxy far, far away.

The imagery and vivid descriptions that is used by writers and directors has the ability to take an audience or reader to another world – literally. This other realm offers complete and utter escapism and we, as an audience who invest time and effort in the story being told, welcome it with open arms.

While in this new world, we meet strange people, races and lifeforms. Sometimes, we see humans who have been mutated beyond what we recognise as humane in our world. Humanity is stripped away from the characters by the setting and world in which they inhabit, leaving them as empty shells with almost animalistic properties, like cannibalism and slaughtering innocent people.

The setting can also give us a glimpse of magical, imaginary worlds we could inhabit the Universe. What those planets look like, how they are made up and what lifeforms may walk, swim or fly around live in the imagination of the author or director and the canvass they have painted for us to view.

Here are some of the sci fi worlds that have shaped the pictures that burn brightly in my own imagination. Some of these helped me shape Hexingham in my novel, Inside Iris. Read on to see which science fiction worlds and settings shaped my creative mind. They may have been in movies and not sci-fi books for teens or adults, but they impacted on my imagination none the less.

This powerful futuristic setting is one that has been with me for many years.

I will always remember, when I first watched Bladerunner, how the dark, thunderous skies were in stark contrast to the bright neon lights that scythed through the city skyline.

I have always felt that this futuristic backdrop felt dirty, distant and polluted. The near-constant rain coupled with lightening and a constant pulsing of meandering people gave the setting a palpable presence, almost like a character in itself.

When it comes to describing an archetypal setting, like Bladerunner, the only way to experience it is to watch it again and follow Deckert as he makes his way through the cityscape.

Walk in his footsteps as he lives it and breathe the same air!

When people talk about how a setting is mind-bending, they can be no less thought-inspiring than Christopher Nolan’s Inception!

The multi-layered, intricate dream settings that he weaves within the movie itself are astounding. This is coupled with his use of cutting back and forth between the ‘dream layers’. This, in turn, is cleverly used as a method of increasing tension later in the movie – no spoilers given!

We all have dreams and we all wonder about the somewhat mystical meaning held within them. This gives us an almost tangible investment in the setting and the characters inhabiting it.

As the picture above shows, when the city starts to bend and fold before our eyes, we are expected to fully suspend disbelief and just go along for the ride.

I was blown away by the originality of these settings and, even though the plot requires our full attention, it has to be said that the canvas in Inception is truly mind-blowing!

This dystopian science fiction movie really intrigued me when I first watched it. It had two settings that really sucked me in!

The Earthly setting was one that is similar to others we have seen in many post-apocalyptic films and books – a bleak but recognisable version of Earth.

The one thing that made this Nolan ‘bleakness’ more interesting than most was the fact that there were no zombie hoards or cannibals. Instead, the reality of how his dustbowl, parched Earth setting could realistically play out before the eyes of our grandchildren is something of a terrifying prospect!

The dustbowl-like countryside and the struggle faced by Coop and his family every day raises so many questions about how our world could look in the years to come. The real-life issues of global warming and climate change make the Earth-based future, depicted in this movie, a little more realistic than the black hole one.

The mind-bending, black hole setting then comes around when Coop makes his way towards the singularity and everything starts to go all…well…Christopher Nolan!

I would go into details of this setting but, as spoilers would be a plenty, I will refrain. Let’s just say that anyone who has seen the movie and are aware of what I am talking about will understand – it is just mesmerising.

In recent years, one of the sci fi settings that I thoroughly enjoyed most was that in The Martian. The sheer isolationism and battle that Mark Watney has with the barren desert of Mars is excellent.

The nothingness that spread out across the pink/red sand and rock had me hooked right from the first moments that Watney was left abandoned on Mars.

With NASA and the ESA looking to man missions to Mars in the coming decades, movies and science fiction settings such as this have a more immediate feel about them than androids and flying cars.

When Watney is able to use his skills as a botanist to survive, one can’t help but consider if this as a glimpse of how humans may survive longer trips into Space.

Shows like The Walking Dead have turned the bleak, desolate, dystopian wasteland into something that has actually borne much fruit for many screenwriters.

In The Road, the two characters trace a landscape that has been ravaged by an unknown apocalypse. The land is covered in ash and inhabited by dehumanised cannibals who have turned the United States into something that resembles Hell.

The continuous search for food, drinkable water and usable resources is part of daily life in such a place. It becomes clear that, once these resources are found, keeping them and yourself safe is an added danger when others need them as much as you do!

The one thing that is a glimpse of light in the bleakness of the world that Cormac McCarthy paints is the relationship between the man and his boy. It is something that reminds us of the humanity that once populated the world.

There are many science fiction settings that authors and scriptwriters hold as memorable in their minds. Sci-fi books for teens and adults have the ability to unite so many fans across and cultures around the world. The worlds that are created for science fiction can be some of the most memorable in literature and cinema.

The other realms on offer, take us by the hand and allow escapism for readers or audiences in packed cinemas. These worlds, and thus this escapism, keep us coming back for more time and time again.

There is no doubt that the worlds above have had an impact on my imagination and you, as a reader, will have favourites of your own. Please offer your own top five science fiction settings and your reasons for choosing them.

I love to hear from other writers and fans of sci-fi who have a passion for vivid landscapes, descriptions and the same escapism that I enjoy. Which sci-fi books for teens and adults shaped your imagination? Comment below.